< Previous
Robots: the new Republican dividing line
Next >
Andrew Cuomo’s shame should be shared by the media
by Aris Roussinos
Friday, 5
March 2021

The world’s dangerous dependency on Taiwan

A global shortage of semiconductors could result in full-scale conflict 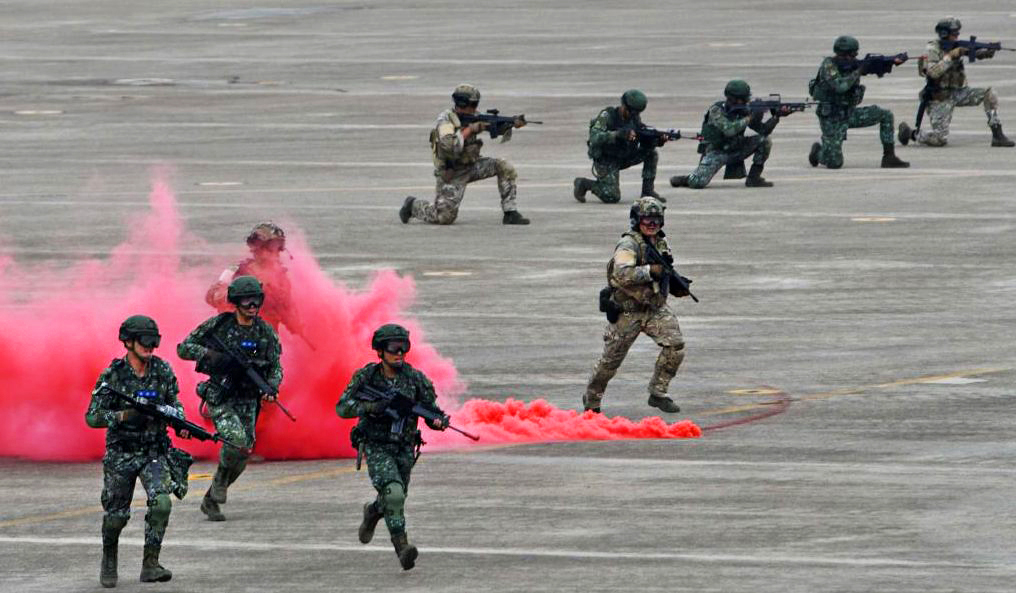 Experts believe the likelihood of a conflict erupting in Taiwan is rising. Credit: Getty

A year ago, warning about the fragility of globalised supply chains was seen as a fringe concern of cranks unwilling to embrace the inevitable future. To fringe cranks like myself, it’s moderately satisfying to see such concerns suddenly become the main preoccupation of governments across the world. In the process of deglobalising the world economy, they are now rapidly onshoring the production of strategic necessities.

The global shortage of semiconductors — the humble electronic chips that provide the processing power for everything from smartphones to cars — has emerged as one of the biggest headaches for governments worldwide. Like a gambler playing roulette, the free market’s much-vaunted invisible hand stacked up the global production of semiconductors in Taiwan, which in normal times would not be a problem. But what was normal a year ago is now a vanished world.

The current semiconductor shortage — which is likely to lead to $61 billion dollar losses for the global car industry alone — is a result of the squeezing of production at the beginning of the pandemic, followed by suddenly increased demand from consumers locked down across the world. But it took this Covid-created shortage for world leaders to belatedly realise that Taiwan’s turbulent relationship with an increasingly assertive China makes the island nation a risky proposition to bet your economic health on.

As the authors of an alarming recent paper for the eminent Council on Foreign Relations think tank note, Taiwan is:

“the most dangerous flash point in the world for a possible war that involved the United States of America, China, and probably other major powers. We think this danger is half understood intellectually, but it is downplayed in the invariable human tendency to assume that whatever the commotion, tomorrow will be pretty much like yesterday.”
- Robert D. Blackwill and Philip Zelikow, Council on Foreign Relations

Likening the situation to 1914, the authors very much do not downplay the risk. Agreeing with the reckoning that there was a 25% risk of a Chinese assault on Taiwan in 2020 — they assert that the likelihood of a conflict erupting in 2021 is higher. As they observe, regarding Taiwan “China is now in a prewar tempo of political and military preparations,” and while Taiwanese forces are rapidly rearming in response, this leaves China with a short “strategic window” in which to attack, increasing the likelihood of a looming crisis.

Would a Chinese invasion be successful? The jury’s out, but the paper’s authors are not bullish on Taiwan’s chances. Will the US intervene militarily? America retains strategic ambiguity on this question, but on balance, they argue, probably not. The effects of such a conflict on the global order are almost unimaginable in scope. Even a limited Chinese coercion campaign, like a sea and air blockade of Taiwan — probably more likely than open war — would have a devastating effect on the global economy — and not least on the supply of semiconductors.

No wonder that advanced economies are rushing to achieve chip self-sufficiency. The Biden administration’s conducting an urgent review into America’s semiconductor supply chain, China is ploughing huge amounts of money into boosting domestic production, and the EU is rushing to achieve self-sufficiency by the end of the decade, with a goal of producing 20% of the world’s supply. If the British government has plans to deal with a looming semiconductor crisis, it would be reassuring to know what they are. If it doesn’t, then now seems a good time to start.

I find it very hard to believe the US will intervene militarily if China takes any form of military action against Taiwan. And Europe simple doesn’t have the military might to do anything.
The cost for China would be severe, though. Any lingering doubts about China’s global ambitions would be erased, Western efforts to begin ‘on-shoring’ key aspects of technology, pharmaceutical production, etc, would accelerate. But perhaps China realizes that, to fully implement its global ambitions, some sort of military action against a much smaller state will eventually be necessary and it’s willing to pay the cost in lost business, possible sanctions, etc. Frankly, I’m not convinced the West has the stomach to push back on China in any meaningful way. We’re too busy imploding.

Well what do you expect? Transphobia won’t solve itself you know.

“If the British government has plans to deal with a looming semiconductor crisis, it would be reassuring to know what they are”
Really? If they are anything like the response to the C-19 Scamdemic we might as well give now, for all is lost.

I heard that if we are in permanent lockdown and we don’t carry our computers and phones around with us, the semiconductors last twice as long.

What a cheerful thought, thanks!

Could you please be more specific; I don’t follow your drift.

‘the EU is rushing to achieve self-sufficiency by the end of the decade‘
What could possibly go wrong?

Unions managing the manufacturing facilities and the chips being a year late and with a 20% faulty rate?

But not really. USA and any European nation could make fine chips, all lacking is the will. The billions of $ on both sides of the Atlantic in insane covid, supposedly, aid could fund it by the left over pocket change. Check out the Dems 1.9 Trillion covid relief – 9% is for covid relief, the rest some kind of pork. Just a fraction of this mad political pork (500 Million to fund abortions overseas, real covid stuff?) and we would be manufacturing all the chips and things which use them we need, but the MSM are owned by China so not happening. Instead it will be spent to deliver every kind of self harm and waste the Dems can conceive of.

Unions managing the manufacturing facilities and the chips being a year late and with a 20% faulty rate?

If you are lucky you can get 20% rate and there is ABSOLUTELY no connection between union labor (hello Germany/Netherlands/Sweden/Switzerland/etc. and their manufacturing base) and chip yield. But bang on about it!

Yes, absolutely yes!!!!! 5 billion would be better.
The last thing the world needs (and USA+EU since many migrate) is more babies born in the 3rd world.
Give them condoms, morning after pills, abortion – everything. Do all you can (financially) to keep their birthrate down.

Then they won’t stay poor, and then where will we get our slave and underpaid labor?

I think blockade would not be viable, as it would be self-harm for the PRC – causing even more economic damage to itself than to Taiwan. Also, a blockade would result in a shift of US forces to the area.
More likely a surprise invasion.

I don’t think it would be a surprise. They’ve been expecting it since circa 1950.

Actually in 1950 MacArthur gave his battle plan to Truman to push the Chinese back across the Yalu, from the book

“In his 1964 book Gen. Douglas MacArthur (Gold Medal Books, Greenwich, Conn.), Bob Considine” (MacArthur said): “The enemy’s air would first have been taken out. I would have dropped between 30 to 50 tactical atomic bombs on his air bases and other depots strung across the neck of Manchuria from just across the Yalu at Antung (northwest tip of Korea) to the neighborhood of Hunchun (northeast tip of Korea near the border of the USSR).

Instead Truman fired him on the spot when he said that, basically. But China still likely remembers.

But part of MacArthur’s plan also included Chank Ki invading back across from Formosa. The world has not always been an Obama, Carter, Biden mess, and USA still has a bite if real people are at the helm.

This time the USN has a minimum first strike option of 336
Trident II D-5 Ballistic missiles, somewhat of an improvement on MacArthur’s rather meagre requirement.

Primary targets maybe the 102 or so Chinese cities with a population of 1 million or more.

The Chinese might do something about that, and the US ruling class has too much to lose to risk it. For now, all parties are going to play around the edges — unless someone makes a mistake.

Currently they can’t, but this ‘opportunity’ will only last for the next five years, ten if we’ are lucky.

The world has not always been an Obama, Carter, Biden mess, and USA﻿

Biden has been president for a month, Trump was for 4 years – the great success (so tired of winning).
You could have addressed the point of the article without the need to score cheap political points or pointless (!) historical references.
Chinese talk about the Century of Humiliation and not MacArthur’s plan.

There is no chance in hell that UK can make chips like TSMC. UK simply doesn’t have the engineers that know how to make chips – (and please don’t give me that BS about ARM Holdings). Or design the high end chips used in computers/phones.
TSMC plans to spend between $25-$28bn in 2021 for its next 3nm fab production. UK’s total (private & government) investment in R&D is about 45-50bn.
Who is going to make these high end chips? JCB? Rolls Royce?
And for what purpose? UK doesn’t have an electronic industry!

Ditto for the EU
It is very very difficult to get EUV lithography right – just ask Intel who despite decades of semiconductor process leadership are now basically a generation behind TSMC.

they claim to (investor call FY2020) have solved the problems. Will see it if is true.

China would never “try” Trump. He knows as do a few American politicians exactly what China wants and is capable of doing. These few know exactly the economic and strategic consequences of the fall of Taiwan. Biden unfortunately is clueless.
US air and sea power dwarfs a minuscule Chinese navy and an untested Air Force. The Chinese people are not quite as captive to the CCP as Xi would like to believe.
The purpose of the US military is to prevent the invasion not defeat it.
When China creates a Taiwan “crisis” that “necessitates” it’s intervention the US must place their own forces on the front line so China attacks US forces. That is the step they might think about twice. The US must use it’s cultural and social media influence to make the Chinese people buy into political and moral freedom and begin to doubt authoritarianism.

Thank the Almighty for that!