The Labour leader stressed the importance of parental consent 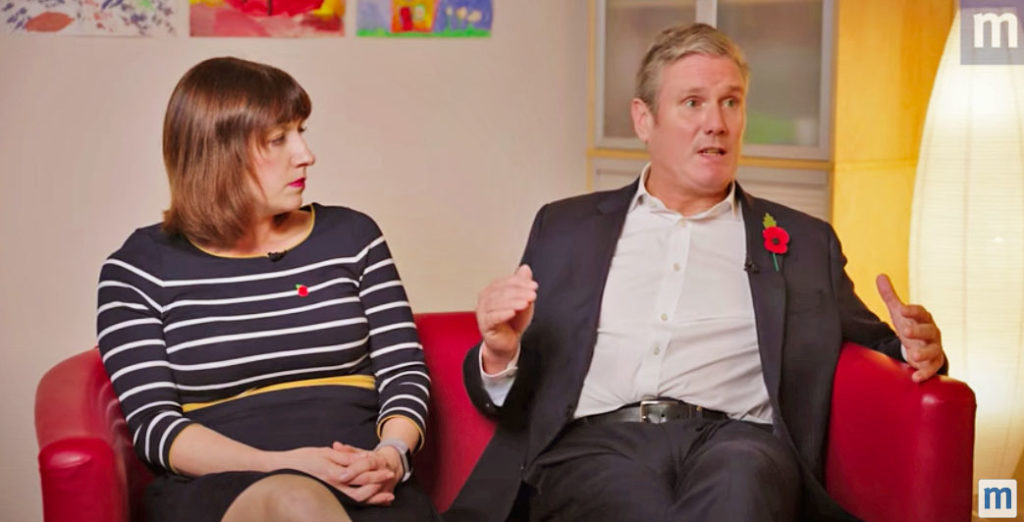 It was bound to happen. At some point, reality was going to catch up with Sir Keir Starmer, who has spent the last couple of years robotically repeating the doctrine of trans activists. Now he’s discovered an issue, the social transitioning of children without their parents’ consent, on which he’s no longer willing to toe the line. His change of heart will be welcomed by parents and health professionals who warn that allowing children to change their pronouns and use opposite-sex toilets at school could put them on a path towards irreversible medical treatment, including puberty blockers.

“We all know what it’s like with teenage children and I feel very strongly about this… this argument that children can make decisions without the consent of parents is one I just don’t agree with at all,” Starmer told Justine Roberts, founder of Mumsnet. Such clarity and passion is rare from the Labour leader, who has not previously shown himself sympathetic to gender critical arguments. What he’s said strikes at the heart of the notion of the ‘trans child’, who supposedly knows from an early age that he or she was ‘born in the wrong body’. If that isn’t the case, the argument for encouraging transition in childhood falls apart, which is why there has been a furious reaction to Starmer’s sudden embrace of common sense.

'We all know what it's like with teenage children and I feel very strongly about this…this argument that children can make decisions without the consent of parents is one I just don't agree with at all' https://t.co/U1y6V1PvVZ pic.twitter.com/UNGy8fQA3C

‘Starmer is not an LGBTQIA+ ally,’ a ‘he/him’ raged on Twitter. The Guardian columnist Owen Jones described Starmer’s intervention as ‘beyond aggravating’ and told him ‘you don’t understand LGBTQ+ people at all.’ At this point I want to say ‘welcome to my world’ and that of the Labour MP Rosie Duffield, who has been relentlessly targeted for questioning trans doctrine. She has just been the victim of another pile-on, with demands for her to lose the whip for refusing to accept that the would-be Labour candidate for Sheffield Central, Eddie Izzard, is a woman. Other Labour MPs have paraded their willingness to use female pronouns for Izzard, while Starmer has repeatedly failed to take a stand against the bullying of Duffield.

Now, apparently, they have something in common, which is a refusal to go along with social transition in every circumstance. But Starmer has done more than that, putting himself at odds with one of Labour’s most frequently repeated policies. Earlier this week, his shadow Cabinet colleague Anneliese Dodds called once again for ‘a full ban on conversion therapy’. What she means isn’t just a ban on the unsavoury practice of therapists trying to persuade or coerce gay people into thinking they’re straight. Labour wants the ban extended to any attempt to talk to ‘trans’ kids about their ‘gender identity’, outlawing the ‘watchful waiting’ approach recommended by NHS England.

To any sensible person, encouraging children into social transition is itself a form of conversion therapy. Starmer evidently doesn’t think children can take such big decisions on their own, yet only last month he publicly supported his party’s misguided policy that would prevent children from talking to health professionals about gender dysphoria.

This is the mess the official Opposition has got itself into by following Stonewall’s notorious ‘no debate’ policy. As Starmer is discovering, trans activists mean what they say: no debate, no exceptions, even for a party leader who found time to present awards on behalf of Pink News only two weeks ago. Honestly, it can only be a matter of time before he faces calls to lose the Labour whip.

I’m not surprised by his reversal. I am surprised, however, that it took him this long. Transideology is terribly unpopular with 99% of the population and no-one wants this junk-science institutionalized and introduced to their children.

Think about it: Starmer’s taxing parents with the approval for their child to change legal sex would be just as destructive of families as letting schools make this decision. 99% of families would answer no if asked should anyone—including parents—be allowed to change a child’s sex on school records? Thanks, but no thanks to Mr. Starmer.

What is your point here? Since trans is at best, not understood, certainly a completely incoherent category, and at worst, entirely fictional, the idea that people should be prevented from demanding society colludes with their delusions is entirely positive, whoever says ‘no’.

I demand that you recognise me as 25 years old, that I am a quadruped, the NHS should fund
the grafting of additional limbs. That is not actually more absurd than the notion than a man can ‘feel’ he is born in the ‘wrong body’, which is a bastardised version of mind-body dualism, and a complete scientific, philosophical and logical absurdity, as we ARE our bodies.

I have never been able to understand how Starmer could go along with any of the absured and toxic ideology of the fetid trans-activists. Twerps like Owen Jones, yes. Idiot NHS and other managers virtue-signalling, yes. Lots of unhappy people afraid to dissent, yes. But Starmer! ForGod’s sake this man was a top barrister with, we may presume, a top-quality brain. How could he ever espouse such nonsense?
I wasn’t even a top barrister — merely a middle of the road one; yet I , like the vast majority of the population, knew from the outset that Pink News and their allies, Stonewall and rest of the clan of brain-dead fanatics, were spouting b—s—..

We are talking about the man who took the knee for BLM faster than Boris could bluster!

Politics is a different game to the law despite many lawyers gravitating to it. Deliberately lying or implying an untruth can get you sanctioned at the bar in contrast slippery untruths are the stock in trade of the politician.

You seem to forget he was the ‘top’ barrister who led the Crown Prosecution Service for a number of years when the police presented extensive evidence of Asian (aka Muslim) gangs grooming and raping hundreds of under age white girls, and failed to prosecute them because the CPS didn’t want to be accused of racial discrimination and because the CPS, the police and uncle tom cobley’n’all thought these girls were child prostitutes gagging for it.

And this man had the brass neck to accuse Johnson of a failure of leadership during partygate.

Owen Jones needs to stop appropriating lesbians to validate his nasty little opinions. Most older lesbians, certainly, are vehemently opposed to ‘trans’ ideology and the damage that it is doing to young women.

He can lay off claiming to speak for gay and bisexual men as well, come to that. A bully when he dares to be, a victim when it suits – emblematic of a problem and perpetuating it to his own benefit.

Does anyone believe Starmer has any genuine convictions at all. He has always looked like a purely careerist trimmer to me.

Starmer can now see the prospect of his entry to Downing Street as PM as something more than a pipe dream so he clearly is increasingly eager to jettison some of the policies that put him at odds with the majority of sensible people.

He will seek to walk a fine path between jettisoning all the daft ideological baggage that keeps his loony activists on side and clinging to all the most obviously undesirable positions they have adopted. In this case the NHS apparatchiks have signalled that the conversion of children against the better judgement of their parents who know them best is not a sensible policy and so he is happy to draw the line here against the full Stonewall ideology.

Like many liberals, Starmer doesn’t seem to realize that his ideology can’t stop “liberating” people. This is built into liberalism, whose very definition is maximal individual autonomy (“my rights only stop at your nose”).
Sorry Keith, but you can’t praise birth control, no-fault divorce, the free-love movement of the 60’s, feminism, abortion, normalization of gay sex, gay “marriage”, drag queen story hour, men getting pregnant,… but suddenly cry “STOP” when kids want to slice their private parts off.
You’re not a real liberal after all. You believe in limits, and liberals seek to overthrow limits. Don’t teenagers deserve to share in all these blessings of liberty? Or are you really an exclusionary bigot who wants to keep poor children trapped in the bodies that are hurting them?
I predict we will see a lot backpedaling like this (“I have always thought this was wrong” despite receipts that the person was actually a cheerleader) in the coming few years. We need to not let them get away with it. From their perches in the most powerful institutions in the world, these people mutilated children. They criminalized political dissent. They destroyed the lives and livlihoods of those calling for anity. They corrupted the core purpose of society to “produce and raise the next generation”. And they actively sought the destruction of British and Western civilization.
Forgiveness? Absolutely. But there still must be heavy consequences.

I e-mailed the Labour Party months ago asking what they meant by trans ‘conversion therapy’ and who was apparently offering it. I’ve still not received a reply.

It is the usual behaviour of institutions when they are asked a question that they can’t answer in any honest fashion.

Owen Jones? Why does he keep popping up everywhere?

Popping up everywhere is a sign of success in your career.

Yup, hot air rises. And something else floats… Now what was that again…?

“the unsavoury practice of therapists trying to persuade or coerce gay people into thinking they’re straight.”

Or, perhaps, trying to persuade or coerce straight children into thinking they’re gay ?
Am I the only one who, for several weeks, have had the top YT, related content, watch next, options be a prominent “Are you gay/lesbian” banner “take our test to see”. (Admittedly maybe my fault, after wondering if maybe I’m a lesbian, clicking on the link and filling out the questionnaire, after all I did find myself rather ‘engaged’ by the antics of Kate Winslet and Saucy Ronan in Ammonite, so it was always an outside possibility).

I still hope Eddie Izzard becomes Minister For Women though. That would be hilarious.

Sorry, just checking out my head shot which hasn’t appeared.