Who is Joe Rogan’s audience? 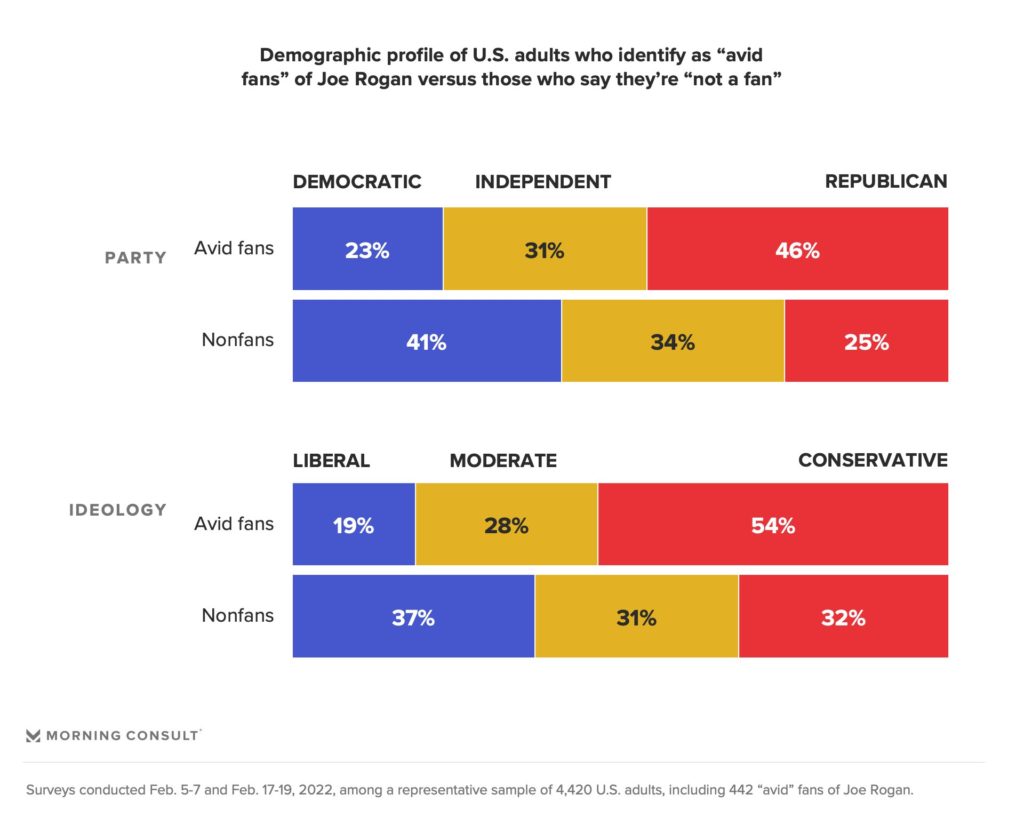 Fox News is the most watched cable news channel in America. According to figures for the fourth quarter of 2021, the network’s top show, The Five, pulled in 3.3 million viewers. The runners-up, Tucker Carlson Tonight and Hannity, were close behind. Altogether, Fox is comfortably ahead of the liberal news channels MSNBC and CNN.

However, the channel would lose its top spot if the Joe Rogan Experience was included on the chart. Rogan’s show is a podcast, not a cable news programme, so it isn’t counted — but with an audience of around 11 million it would dominate the ratings.

If the impact of Fox News on American politics is worth studying, then it follows that the same applies to Rogan. The business intelligence company, Morning Consult, has just published research into the make-up of his fan base. According to the findings, one in ten Americans consider themselves to be “avid fans” and further two in ten describe themselves as “casual fans”.

How do the avid fans — presumably the core of Rogan’s audience — compare to the seven in ten Americans who don’t describe themselves as fans?

The study’s author, Eli Yokley, has also tweeted out some charts on political preference. Though Joe Rogan rejects Right and Left labels for himself, his audience leans Right — with 46% of this avid fans identifying as Republicans (and just 23% as Democrats).

So from a Democratic perspective, are Rogan’s listeners a lost cause — a younger version of the Fox News audience? Looking down the replies to Yokley’s tweet, that appears to be a common reaction.

And yet, as Yokley points out, almost half of Rogan’s fan base did not vote for Trump in 2020. There are literally millions of votes up for grabs among this group. What’s more, the man they’re so avidly listening to endorsed Bernie Sanders in 2020, a self-declared socialist.

For all the talk of political polarisation between the red and blue camps, there are millions of Americans who don’t conform to the political binary. If Democrats and Republicans can’t speak on their behalf, then we can expect an increasingly influential voice for those who can.

Social media rewards with likes. Extreme views get likes from armchair activists. Journalists can’t be bothered to investigate, and are now armchair activists anyway, so report what’s trending on Twitter, and polarisation enters a self reinforcing loop.

The overwhelming majority in the middle find the whole thing untrustworthy and distasteful. Those that can be bothered seek out longer form, non partisan, intelligent analysis, and finish up with Joe Rogan or Unherd, or sub stack and so on.

This isn’t rocket science. That our politicians don’t seem able to figure it says a lot about them.

“his audience leans Right” – in all honesty, I wonder if what this really means is : ‘his audience likes candour and plain speaking”!

I feel neither right nor left when I listen to a conversation that goes deep and wants to find common sense. The years of wearing a corset are over, and everyone is no longer forced to follow a strict narrative. The legacy media and analysts are still stuck in the old format where the audience was defined by political leanings and beliefs. As the saying goes, both sides of a coin are equal, because one is not without the other, so it is only logical to use the more obvious option and get more value for your time invested.

The reason that Rogan’s audience doesn’t conform neatly to a right-left binary, is that Rogan himself is not so easily put into these categories. Depending upon the subject (drugs, police brutality) he might be a liberal, but while speaking of cancel culture or porn he’ll sound like a conservative.
Or rather, he’ll just sound like a complicated, normal person. And it’s really Rogan’s normalness that is his attraction.
He just speaks his mind, is curious about the world around him, is an expert on just a couple of issues, and isn’t always looking over his shoulder looking for kudos or worrying about the cool kids shunning him. THAT is why the media and liberal establishment needs to savage him as some hateful right-winger: he doesn’t conform. (To those who know anything about him and his show, love him or hate him, it was comical to see him slandered as a “right wing shock jock.” He endorsed Bernie Sanders after a 3 hour conversation with him, for God’s sake!)
He’s a throwback to the days where guests on talk shows could think out loud and get things wrong, or those late night dorm conversations (the pot helps). It’s very refreshing and that’s why he has such a huge audience.

Warren T
Reply to  Vince B

I don’t listen to Rogan often, and mostly agree with what he is spouting off, but I do find his manner a bit distasteful. But anyone who would advocate for Bernie Sanders for POTUS would be suspect to me. I simply cannot support socialism in any form.

Why can’t you support it in any form? Almost every country has aspects of socialism such as infrastructure, the transport network, pensions, emergency services and education and healthcare systems. Would you rather see all these reduced to a user pays capitalist model?

It’s reassuring to know that these, primarily younger people, are seeking out someone who wants to discuss issues critically, and avoid the partisan narratives of the MSM.

Yes, politicians and pundits want to push us into separate voting blocks that they can address and manoeuvre over. “ If you vote Trump you ain’t Black”. Fortunately as far as I can see the young are not uniformly woke but plenty delight in Jordan Peterson and intelligent non-standard non-MSM commentators. Long may it continue and hopefully a few more will speak up instead of keeping their views a bit of a secret that might get them into trouble with the woke mob or damage their job prospects. I remember the same sort of dissimulation in Czechoslovakia under Communism.

As JBP would say, “Yes, that is exactly right”. And as Bret Weinstein often says, “Welcome to complex systems…”

If a human being is not considered a complex system, I’m not sure where reality lies. Most people I know are more than tired of being condensed into false dichotomies by reductionist thinking and coercive politics. We are done with it.

“the majority of avid fans are white (64%)”
What is the significance of that; slightly less than the percentage of European Americans?

Morning Consult is a “business intelligence company”, is it? First paragraph of their article:

Politicians, especially Democrats, have largely eschewed appearances on Joe Rogan’s chart-topping Spotify podcast, where the elevation of bigoted rhetoric and COVID-19 denialism has thrust him into the center of America’s cultural and political fissures.

lol. I see. Well, now I’m totally sure this poll was conducted in an intelligent and businesslike manner.
No, wait, scratch that. I’m actually pretty sure it was run by hard left writers who set out to smear JR from the start.
Let’s take the obvious first question I was expecting this article to answer at some point, but it never did: Where’s the “don’t have any view/haven’t heard of him” group? Oh right, it doesn’t exist. Literally every single American has heard of Joe Rogan and has a strong viewpoint on his show. Not a single one doesn’t care or has never listened. Zero.
Back here in reality, if you want to make it look like most Americans don’t like Joe Rogan then you set up a push poll in which you ask people if they are “fans” or “not a fan at all” and thus force everyone who doesn’t know/doesn’t care to say they’re “not a fan”.
The Morning Consult article has yet another problem; it starts by lying to its readers. It claims without evidence that Democrat politicians have “largely eschewed” going on, which means, they chose not to. Later in the article though, the only people who would actually know – people at the Sanders campaign – say, “Every presidential candidate was begging to go on … everybody wants to go on his show”. So apparently they aren’t eschewing it at all.
I realize it’s tempting/important to write about a phenomenon as large and important as the JRE (to which, by the way, I’ve never listened and thus am also “not a fan”). But Unherd is normally better than this. If you want to know what JRE listeners are like then you should commission your own poll, not simply re-report the words of a bunch of politics hacks who clearly hate Rogan. And you should definitely not describe them as a “business intelligence company”. They obviously aren’t. They’re just another left wing media outlet, as made clear in the byline of the writer:

11 million listeners can’t be ignored. But let’s not forget that Rush Limbaugh garnered between 15-20 million weekly listeners during his career and was unapologetically conservative.
May he R.I.P.

Thanks for doing the research that the author of this piece should have done!

“For all the talk of political polarisation between the red and blue camps, there are millions of Americans who don’t conform to the political binary. If Democrats and Republicans can’t speak on their behalf, then we can expect an increasingly influential voice for those who can. “
Let’s hope!

I watch, but don’t fit the general profile.

Yes. I do as well on both points.

Rogan’s biggest strength is that in the main he represents the average person on the street; in holding conflicting views, attitude and complexity of character/beliefs. He has some excellent, non-political, guests on his podcasts across a diverse range of interesting subjects. This has been lost somewhat in the noise over his “political” views, but I would be surprised if there is any other podcaster with such a broad range of interests, who explores them in their output. Some of it is in the “so obscure, I didn’t know I was interested in this” bracket. In fact, giving it more thought, I would suggest that the vast majority of his output is non-political.