< Previous
No, Afghanistan did not hurt U.S. 'credibility'
Next >
Gorbachev laid the ground for Putin — and his war
by Oliver Bateman
Wednesday, 31
August 2022

The un-cancellation of Sam Hyde

The Right-wing comic is rehabilitating his image through boxing 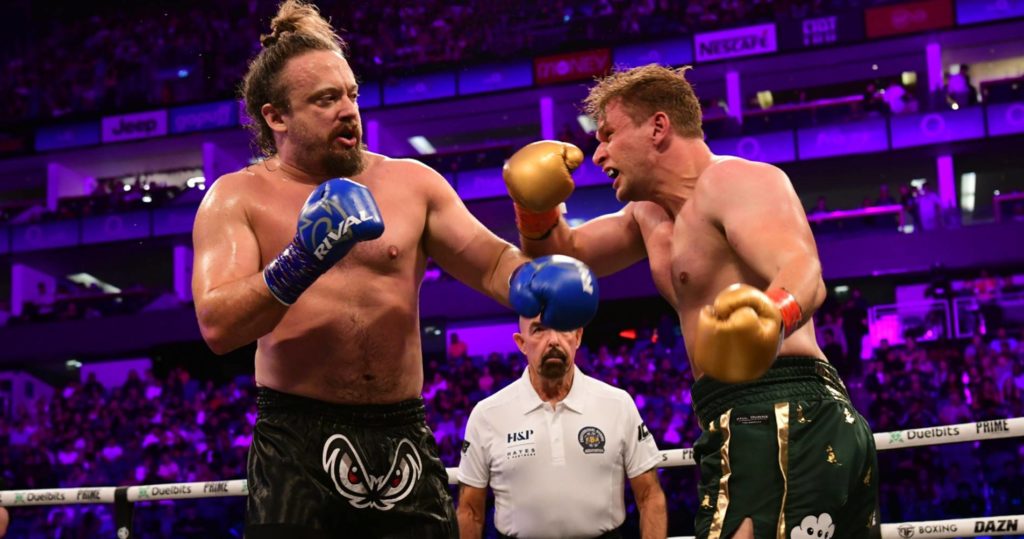 Whether fans of boxing like it or not, YouTube vloggers, Twitch streamers, and other content creators have begun drawing more eyeballs to their work by fighting each other in high-profile “creator clashes” — and people like brothers Jake and Logan Paul have raked in millions of dollars as a result. The format is making big stars out of people who aren’t household names. Now, it seems like it could restore the reputation of the extremely “cancelled” American comedian Sam Hyde, who trended on social media this weekend after he knocked out popular music influencer Jake “iamthmpsn” Thompson in a heavyweight boxing fight.

To put Hyde’s return in context, it helps to understand his precipitous fall a half-decade ago. After announcing himself as a force on the comedy scene in 2013 with a subversive TedX talk entitled “2070 Paradigm Shift”, Hyde rode this bit of minor fame to a cable television deal with Adult Swim. The resulting show, Million Dollar Extreme Presents: World Peace, represented an evolution in sketch comedy aesthetics beyond the tamer territory staked out by its obvious inspiration, Tim and Eric Awesome Show, Great Job!. But the show triggered critics and network executives alike with its edgy, uncomfortable humour and what some claimed were “coded racist messages” hidden in the intricate sets and animations. Comedian Brett Gelman quit working with Adult Swim because of the show, and Tim Heidecker — one of Hyde’s comedic influences — denounced the young comedian, starting a long-running feud.

Hyde was one of the first semi-mainstream pop culture figures to fall from grace, wiped away completely in the initial wave of cancellations that followed Trump’s election in the United States. He made some strategic missteps afterwards, such as signing up to be part of alt-Right gun activist Cody Wilson’s “Hatreon” service for “cancelled” creators — which quickly disbanded after Visa refused to process its payments — and pledging $5,000 toward the legal defense fund of Andrew Anglin, who ran the neo-Nazi publication The Daily Stormer.

Were these components of Hyde’s elaborate troll character, a sort of Andy Kauffman-like response to current events? The line between reality and trolling is never clear when Hyde is involved; he has staged numerous in-your-face pranks over the years, his name is always circulated as a suspect whenever a mass shooting occurs (the May 2022 shooter in Buffalo, New York actually included images of Hyde in his manifesto as “recent self pictures”), and even his own height has been questioned until a proper boxing weigh-in established it at 6’5”, as opposed to all of the other random numbers put forward by his legion of fans.

Flash forward to last Saturday and Hyde is trading blows with stocky but shorter “violin influencer” Jake Thompson at DAZN’s X Series 001 pay-per-view event. The match was your typical amateur heavyweight affair, with both men gasping for air after the first round and Thompson even resting his hands on his thighs, but it ended with Thompson knocked out on his feet.

Hyde, who had been in character throughout the entire fight week, remained so during the post-fight interview, in which he threatened to kill the popular Left-wing streamer Hasan Piker. Piker, who is almost as tall as Hyde but considerably thinner, has thus far declined Hyde’s overtures, but their back-and-forth continues to raise Hyde’s profile.

As oft-criticised vloggers-turned-fighters Jake and Logan Paul have already demonstrated, controversy creates cash for people who can launch their own platform — and a Hyde-versus-Piker match would surely be a main event draw given Piker’s enormous fanbase. Hyde, as resoundingly cancelled as any creator of his generation, would be right back in the mix — firmly established, to quote incendiary 1970s New York Yankees outfielder Reggie Jackson, as “the straw that stirs the drink.”

Sam Hyde is probably the best comedian of the past decade. He is the internet’s court jester. We do not deserve such a man who suffers continuously for still having the gall to transgress as all comics should do. For example, by having his TV show stripped from him by Adult Swim. The ever-present smears against him such as those pumped out by the LA Times and various Vox/Vice/HuffPo usual suspects were always pure nonsense. It’s just a shame it took a laughable boxing match for a wider audience to finally notice a figure who in a functioning culture would have been treated properly.

I saw Sam fly over Kiev once. That was after the school shooting.

Who are all these people? And people follow their antics! I’m bemused at my own ignorance of this huge area of media activity.

I’ve never heard of any of these people or programmes

Well, now you have.

Me neither, but thank you, immensely, for informing us all of this fact. I doubt that I would have been able to continue my day without this knowledge. Perhaps our rest this evening will be more pleasant and deeper than usual, now that we are in possession of this worthy insight.

Never heard of any of these people.

If you’re over 35 then it is unlikely that you would have. If you are under 30 it would be impossible for you to at least have heard of ‘Samir al-Hajeed’

I’m 55, but my kids got me into Hyde. I watched some of his Youtube stuff — the Ted Talk is a classic — and I got a Gumroad sub about a year after. The guy is brilliant, hilarious, and a total mega-troll. He had everyone laughing all week long during fight week (KSI especially) with his Irish-American minstrelsy, and has now been uncanceled to a degree that iDubbbz could never have envisioned or he never would have banned him from Creator Clash.
To everyone pulling the “never heard of him” cope, y’all look so cute. No one heard of J. K. Rowling before she wrote Harry Potter, and no one heard of Henry Winkler before he starred in Happy Days. Etc.

Well I’ve done my research today and I can see you’re being rather disingenuous with your Rowling and Winkler comparison, since Hyde has been active for 10 years plus and well known to audiences who follow this particular media genre. So he wasn’t a nobody.

The reason this aspect is worth noting, for me anyway, is that I only realised from my research today that this comedy, cartoon, politics, boxing media niche is quite huge – not really a niche in fact – and it demonstrates to me how totally disconnected I am from people who engage with that niche, and news about it too. I clearly live in an echo chamber even as I try to see outside it.

But Paul, y’all look so cute showing your smugness! We love know-it-alls!

loz… i never heard of Ian Stewart before today, but I bet he has been around a LONG time

Paul Fry, you ain’t 55, you sound like a kid. Idubbbz hasn’t been relevant for years either because his fanbase was comprised of kids who grew out of his content.

You’re an embarrassing fanboy and if you really are a 55 year old father and not just some virgin teen, then wow. You’d think with age, knowledge would come with it but clearly not. Most people don’t know about YouTubers in the real world. The fact you compare them to actual celebrities is hilarious and there’s many people who don’t know every celebrity because guess what? Not all of us are mindless slaves to celebrity worship.

None of these people are relevant in the real world.