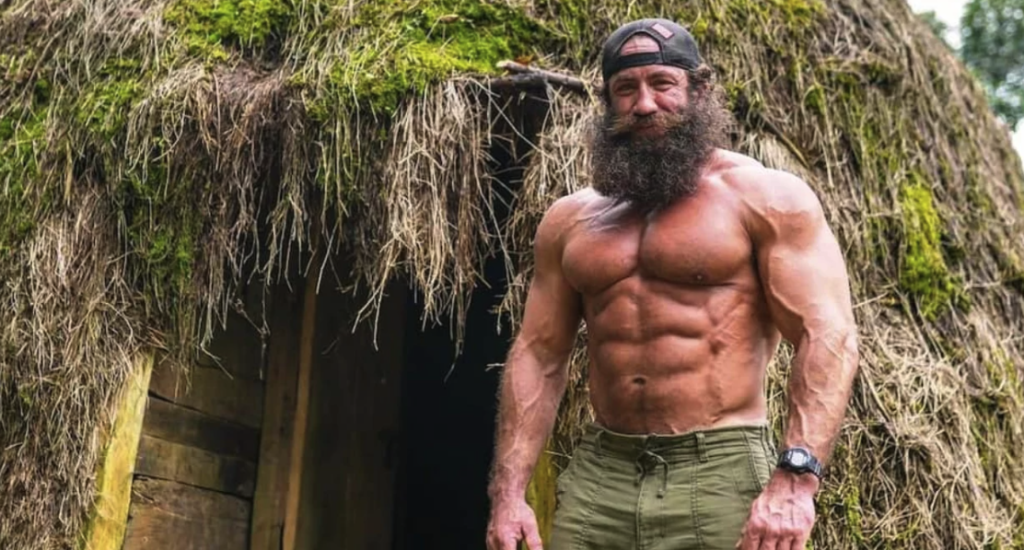 The results of an ancestral lifestyle?

He attributes his eye-catching physique to the consumption of raw organ meats and testicles in conjunction with an “ancestral lifestyle” built on nine tenets (“wins,” “primals,” “move,” “eat,” “cold,” and so on). Even as his fame grew and high-profile people in the sports and fitness world, like podcaster Joe Rogan, accused him of steroid use, the Liver King merely said he was glad famous people were talking about him. At the same time, he adamantly maintained that performance-enhancing drugs played no role in the development of his physique — which he claimed to have been building since he was a teenager.

It should come as little surprise, then, that emails written by Johnson himself, asking for advice about the steroids he was using, were eventually forwarded to the YouTube fitness channel More Plates, More Dates. Written prior to the launch of his assorted online accounts and fitness brands — at a time when he had almost no social media following whatsoever — the Liver King outlined his $11,000-a-month steroid regimen, explaining that he needed to lose his love handles and back fat in advance of launching the “ancestral lifestyle” content that would make him famous.

Far from being the caveman-like “primal” who spent hours a day in the sun and ice-cold water before sleeping eight uninterrupted hours each night, the email correspondence depicted an individual who pinched his tummy in the mirror, watched Marvel movies, and struggled to sleep more than a handful of uninterrupted hours before waking up in a state of discomfort. He was, in other words, another middle-aged man desperately trying to turn back the clock — one of many such cases.

When I asked steroid expert Anthony Roberts about the Liver King’s drug regimen, the long-time fitness journalist explained that since the influencer’s branding is “almost entirely predicated on his physique resulting from a purported “ancestral lifestyle”, this was “money well spent, even if it turns the marketing into a somewhat dubious affair.”

Roberts has spent his career uncovering fraud and deception in the fitness industry. Liver King’s method was a textbook hustle: as discussed by Malcom Kyeyune in a recent City Journal article covering such curious quasi-faiths and fitness cults, he had to sell the esoteric knowledge of his supposed lifestyle to today’s slovenly modern men, but since walking, outdoor exercise, and eating organ meat can only do so much for the typical testosterone-depleted couch potato, he needed his steroid-infused body as proof of concept. If you do as I say, the Liver King’s sales pitch goes, you might end up looking like I do — only you never actually will, because you’re not using the steroids I use, so you’ll have to keep coming to me for advice and fitness supplements that don’t do the job.

As is the case with many exposed fitness hucksters and confidence men, the revelation of the Liver King’s real source of strength wasn’t enough to dissuade those who see merits in his methods or find spiritual solace in the message. The anonymous fitness influencer SolBrah — who promotes a similar lifestyle but, owing to the anonymity that cloaks him and related accounts like the liver jerky-peddling Carnivore Aurelius, can’t even be scrutinised the way the Liver King has — responded to criticism of Johnson by remarking that “you don’t know the possibilities when you do everything right in terms of training and eating for 35-plus years” (which the Liver King, by his own admission in those emails, had not).

In fact, the Liver King is rarely seen doing anything but eating organ meats, posing for the cameras, and carrying kettlebells — hardly impressive from a functional perspective, his physique notwithstanding. When asked whether the Liver King’s level of muscular development could be obtained without steroids, Anthony Roberts was sceptical:

We do know about the limits on physical development as far as training and eating right goes, because plenty of people have started training as teenagers and we know how they look 35 years later. On the other hand, many steroid users look exactly like him — Occam’s Needle, you might call it.
- Anthony Roberts

Nevertheless, the Liver King and other popular fitness influencers like him have continued to achieve considerable fame through outright deception, a practice Roberts refers to as the “oldest and cheapest performance enhancer there is.”

The man ought to be prosecuted for fraudulently obtain money by deception but of course he won’t be because so many businesses rely on fraudulent and exaggerated claims. The whole political class are elected on the basis of claims that are either demonstrably false or of much less validity than are claimed.

I’ve been doing weightlifting for nearly 15 years as my main way of keeping fit, and my first reaction to seeing this liver king guy was that ‘he’s probably on roids’. Because nearly all the guys I have seen in the gym that were that huge were on roids.

Indeed. I’ve been weightlifting for about 25 years, and look exactly like what I am, a reasonably fit and strong 58yo – nothing like him.

I think most people probably suspected he was on steroids just looking at him. He’ll have to tone down his nonsense now but his Instagram will continue to be entertaining and I’d imaging he’ll keep most of his followers. The “primal” lifestyle like anything is based on a grain of truth but with vast quantities of BS.

I’ve never even heard of this man and from my first glance at the photo I could tell he is a roidhead.

Highly entertaining article. To be fair to the self-styled ‘King of Offal’, even if you do inject or ingest anabolic steroids, you still need to both put in a huge amount of work in at the gym and have the right genetics to get that buff. Like Mr. Layfield, I have spent much of my life trying to keep in shape at the gym (currently somewhat lapsed) and while nobody that big and ripped didn’t take steroids, those that were also pumped a lot of iron (and there were flabby wasters who thought that if you took ‘roids, a brief workout followed by a dinner of beers and a kebab would suffice).
Maybe he eats all that liver in the hope that it will replenish what all the ‘roids must have done to his own. Kind of like ancient warriors devouring the hearts of their vanquished foes for courage (although I probably got that from reading Slaine in 2000AD).

Gosh there are dishonest people in the world.

There’s also the issue of tautology in the article: ‘consumption of raw organ meats and testicles’

I’m reasonably happy that testicles classify as bodily organs. With regard to their consumption (from young rams or bullocks, I hope) may I recommend lightly poaching, slicing thinly and sautéing in sage butter. Liver to be served pink with a red wine and onion jus, crispy bacon and mash; perhaps with a nice glass of Chianti to wash it down?

It takes the lotion, and it rubs it on its skin.

Remember men of my generation falling for the cons of a chap called Atlas hoping to achieve such, in my opinion, a abnormal physique
My brother and brother in law fell for the con, they never achieved such a physique thank goodness.