Spare a thought for EU Supergirl

Acoustic guitars were no match for Nigel Farage in the end 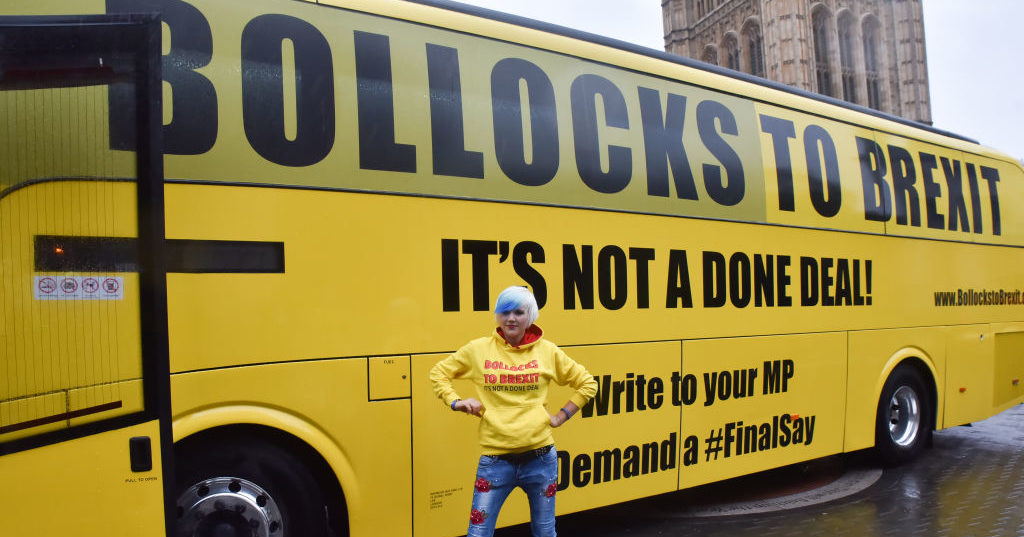 Five years on since the Brexit vote it’s important not to let history forget the real political heavyweights of that era –  the ‘activists’ and musical pioneers who provided all of us, Leaver and Remainer alike, with hours of entertainment.

As People’s Vote titans and Brexit Party ideologues battled it out at the top of the news cycle, they attracted the attention of people desperate to get in on the act — formerly unknown individuals who shot to micro-stardom, performing acts deranged political minstrelsy to the delight of their fans.

Nobody better embodies the artistic genius of the remainiac mini-celebs than Madeleina Kay, best known under her stage moniker as ‘EU Supergirl’. The musical arts came naturally to Madeleina, and she used her talents in singing and songwriting to promote the interests of Remain ultras. Equipped with her acoustic guitar and a frankly disconcerting obsession with the European trading bloc, EU Supergirl became a fixture in #FBPE protest circles, meeting with Blairite-fixer-turned-EU-fanatic Alistair Campbell and gifting the world with a photograph reminiscent of a proud dad dropping his teenage daughter off at Bestival.

Indeed, Madeleina was something of a pioneer for enterprising young women hoping to fleece the centrist-dad demographic under the guise of ‘activism’, managing to crowdfund £4,528 to tour the EU27 “promoting the hashtag #TheFutureisEurope” — essentially raising near-on five grand to go on a nice continental holiday.

Madeleina, to her credit, has stuck with her passion, and still proudly reps her ‘Young European of the Year (2018)’ award in her twitter bio. Perhaps she should take this opportunity, five years on from the vote, to attempt a rebrand? Don’t let your musical talent go to waste, Supergirl! After the unfavourable feedback towards Gavin Williamson’s ‘One Britain, One Nation’ song, the government must be desperate for some artistic inspiration.

And who can forget Steve Bray, the archetypical divorced-dad-having-a-meltdown remainiac? Adorned in a EU flag worn as a cape, he acted not as the hero we deserved, but the hero we needed: dastardly MPs plotting against the enlightened benevolence of the European Commission found themselves at a loss, unable to counter the political might of a man equipped with a couple of A2 placards and a megaphone.

Will there still be, in a few decades time, a sizable group of individuals singing about gammons, flagshaggers and brexshitters? I sincerely hope not. But there will always be another ostensibly dull political debate that inspires artistic passion from the terminally un-busy. It remains to be seen whether the longevity and single-mindedness of the Remainiacs will be replicated in the liberal protest movements of future generations — sure, your average Gen Z activist will have a strong opinion on Israel-Palestine, but they’ll also be occupied thinking about whether dating is just unpaid sex work and if pop-superstar Olivia Rodrigo is too skinny. It’s hard to envision a Zoomer Steve Bray, able to maintain their attention on a singular issue for longer than 30 minutes.

Perhaps this is what marks out the EU-Supergirls of the Brexit days so endearing, no matter your political affiliation: they were sincere to the point of hilarity. So spare a thought for the forgotten remainiacs – living proof that when it comes to cringe-worthy activism, nobody does it quite like the British.

Very funny.
Nigel Farage is arguably THE Englishman of the last decade.

Brexiteers had better music; what about Dominic Frisby? He was a joy.

Marvellous. Chapeau to you, Ms Coburn!

I never heard of EU Supergirl. Until now.
Which I guess is the point.

I have always held England (and whatever other bits of UK join in) needs to apply to become the 51st and 52nd State of USA, Canada the 53-55th and Greenland a American Territory. That would be the making of a real Super Power, one for Democracy and Decency. The problem, and why I am changing my mind, is the Trump/Biden thing, the British would just vote Biden/Kamala and vote for their own self harm as they have been doing since 1991 – and Canada with its Insanely bad Trudeau…..shows its voters are also possessed with excess self loathing.

But what a great power it would be! The world safe for ever, except from its Liberals.

Wile (noun): a devious stratagem.
While (conjunction): whereas, indicating a contrast.